I've been in the middle of training for my half marathon, and wanted to explain a little bit how I've been using our new multi-charts to help me out, because it's been quite helpful to understand what's happening in the data itself.

I used to have to flip back and forth between HR and pace, or have two windows open, but that's was ultimately a poor solution. So we fixed it. The result was the new overlay charts. Hopefully you agree that this is a major step forward. It's not only more useful, but we think it also just looks better. 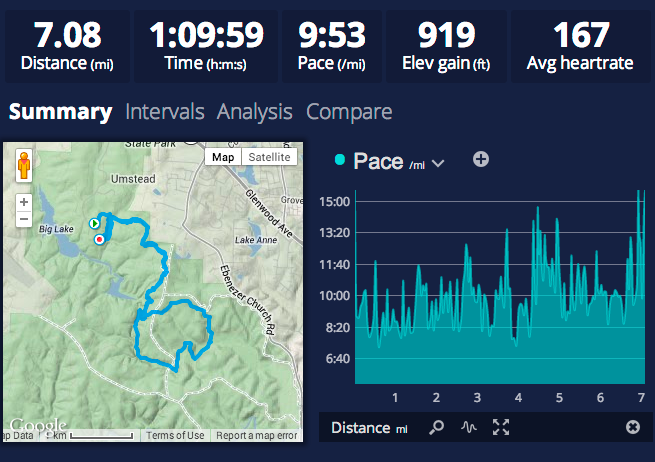 Back to my last run... I needed to run 6-7 miles, so I headed out to a local park, but didn't get going until the sun was setting.

(As a word of warning, running without a headlamp in a forest at dusk is a dangerous endeavor that's best left to the sure-footed, nocturnal animals with ankles of steel. This decidedly does not include your recovering writer.)

Here's a quick look at the chart as it's presented, before I start messing around and customizing it. You may notice a couple new tools: a plus sign, a magnifying glass, a snake-looking thing, and a rad throwing star. These all have technical terms, too: Zoom, Smoothing, and Expand.

First thing I'm going to do is click the throwing star (Expand). This gives me a better view of the data. While the map is handy and fun to look at, the real data is in the charts.

Second thing is to setup the metrics that I'm analyzing. I like to have Heart Rate as the filled backdrop, as it defines the lines on the y-axis and gives me the ability to quickly see the most important value across the chart. After heart rate is Speed. I prefer speed to pace because I prefer to have "better" values going up, as opposed to looking at pace, where lower values are "better", and then trying to invert the chart to fit. Last is elevation, as it significantly effects performance.

My third action is to click the snake (Smoothing) and drag it off to the right. There's a lot of noise here, so smoothing should help me look at trends over the run, rather than focusing on a specific section before understanding the larger picture.

What do I see here? First, I should explain my plan, which was to hit 160bpm for the first third, 165bpm for the second, then 170bpm for the last third. This is all based off a vague idea of heart rate training that could frankly use a little more structure.

I'll be looking at these target zones using the zoom tool, breaking it into 0 - 2.5mi, 2.5 - 5mi, and 5mi - 7.1mi. The zooming will allow me to look only at the specific zone, without being distracted by what comes earlier or later.

Well, I started out faster than average, between 6.5 and 7 mph, until my heartrate reached (and briefly exceeded) the first target zone. The two dips at 1.8mi and 2.3mi are me reading the map to make sure I'm not getting lost. Everying seems to be going well reasonably well so far.

From 2.5mi in, I was starting to target 165bpm. Unfortunately, looking at my watch to regularly read HR wasn't very practical in the terrain of roots, sticks, mud and more. So I was pretty inconsistent and exceeded my zone pretty substantially, with a fairly constant increase.

I wanted to get more detail into this, however, as the smoothing is interfering with the details. So I set the smoothing to the minimum, which results in an interesting chart.

Suddenly, I can see that the hill at mile 3.7 really raised my heart rate (maxing at 184bpm) and I relaxed on the downhill, dropping to 161-162. Then, I overcompensated and ran around 177 for the next 8 minutes. 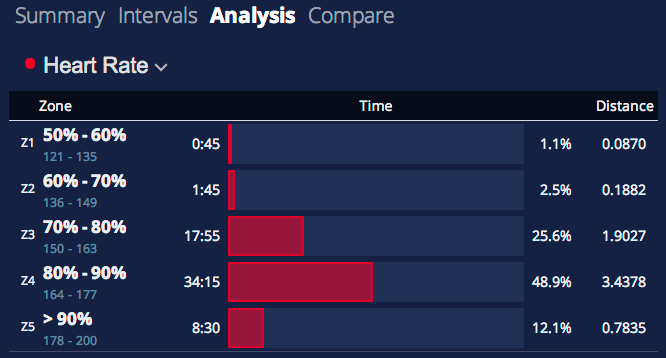 I won't show you the details of the last third, as it is pretty much a disaster: I'm running through a forest at 8:15pm, low light at best, potentially twisting an ankle at every step, trying (ahem, failing) to see the blazes and wondering why didn't I bring my headlamp. The data fairly well echos that chaos, with large peaks and valleys in heart rate and speed.

What can I take away from this? First, I need to work on consistency. It's tough on a trail, but certainly improvement opportunity is there. Second, I was able to somewhat hit my target zones in aggregate, which is good. My next medium-length run will make sure to be squarely in Zone 3 to let my body recover a bit before hitting it hard again.

But, of course, the biggest lesson is to not run in the forest at dusk without a headlamp. It's not as if the heli is getting the overhead sunset shot while the ground team is following you, filming material for inclusion in an upcoming video biography to be featured prominently on NatGeo. It's just me running in the dark, tripping my way along the trail, wishing I had left just thirty minutes earlier.